Heart of Mist is the first book in the new YA fantasy trilogy The Oremere Chronicles from Sydney author, Helen Scheuerer…

It’s been compared to the recent epic girl-power film, ‘Wonder Woman’ and Sarah J. Maas’ ‘Throne of Glass’ series. It’s garnered early 4 & 5 star reviews from all around the world. 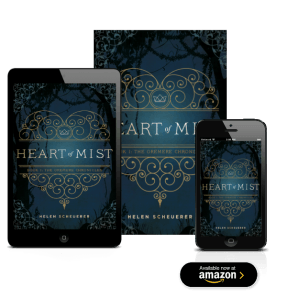 Get Heart of Mist here.

In a realm where magic is forbidden.

In a realm where toxic mist sweeps across the lands, feeding on magic…

Bleak is a nineteen-year-old magic wielder, a member of the diminishing Ashai race.

Still grieving the death of her guardian, and self-medicating with alcohol, Bleak is discovered by the Commander of the king’s army and is taken from her home. She’s summoned to the capital to answer for her crimes.

But the king isn’t the only one interested in her powers.

The leader of the Valia Kindred, the realm’s most infamous society of warriors lays claim to her as well, and Bleak finds herself in the middle of a much bigger battle than she thought.

Heart of Mist is the first book in The Oremere Chronicles, a fantasy series of epic proportions.

Helen freelances for a number of websites and helps authors with their manuscripts while she works on her own fiction and manages Writer’s Edit. Her debut novel is due for release in 2017. She chronicles her writing process and work over at HelenScheuerer.com.