A big HAPPY RELEASE DAY to our talented author, Bonnie Wynne, whose debut fantasy novel THE NINTH SORCERESS is out today.

The Ninth Sorceress is the first volume in the new classic fantasy series, The Price of Magic. 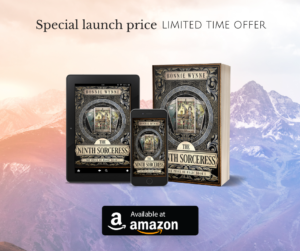 A shadowed past. A vengeful goddess. What price will Gwyn pay to discover her destiny?

Wrenched from her mundane life as a herbalist’s apprentice, teenage orphan Gwyn learns she is hunted by an ancient goddess.

For seventeen years she’s been protected by her guardian, hidden away like a dark secret. But suddenly, she is thrust into the care of some unlikely companions, pursued by wizards and confronted by the dangerous powers she’s spent her life suppressing…

Now, Gwyn finds herself drawn into a deep and ancient tale – one of lost magic, truths long buried and the rising of a war she never could have imagined.

If you like rich worldbuilding, breathtaking magic and captivating storytelling, then you’ll love The Ninth Sorceress, the first book in the classic fantasy saga, The Price of Magic.

Buy your copy of The Ninth Sorceress to begin this unforgettable journey today!

Get The Ninth Sorceress at a discounted launch price – limited time only!

Remember to grab your copy before the price goes up to $7.99.

Early praise for The Ninth Sorceress

★★★★★ “An absolutely breathtaking fantasy that rivals the likes of Patrick Rothfuss and Robin Hobb.” – Goodreads reviewer

★★★★★ “A complex female lead. A whirlwind adventure. And worldbuilding that’s nothing short of epic.” – Goodreads reviewer

★★★★★ “An unforgettable heroine and story. Perfect for lovers of Samantha Shannon and Brandon Sanderson.”- Goodreads reviewer

Don’t forget you can also add the book on Goodreads and find out more about Bonnie at her website.

The official The Ninth Sorceress launch party will be held on Saturday, February 15th at iconic Newtown bookstore, Better Read Than Dead.

If you’re in Sydney, we hope to see you there!