The Scions roam free, and only the sorceress can hunt them…

After the battle with storm god Molech Suun, a city is in ruins and a new Archmage holds the Syndicate’s leash. But while Gwyn has accepted her fate – to hunt down and destroy the remaining Scions – her loyalty is still to her old master Faolan, held captive by a cunning necromancer.

Saving Faolan means leaving the wizards and the Clockwork City behind. With the shapeshifter Lucian at her side, Gwyn embarks on a dangerous journey across the sea, to lands where pirate kings rule and wild magic sings.

But sorceresses are heir to a dark legacy of blood – and Gwyn soon finds that she’s the one being hunted.

The Scions want her dead, and a new enemy sends threats and warnings that can’t be ignored. As Gwyn struggles to balance her desires and her destiny, she finds herself unprepared for what awaits her beyond the city walls. And far to the south, amid the ashes of a fallen kingdom, a familiar foe is setting deadly plans in motion…

The Stars Beyond the Stone is the dazzling third instalment in Bonnie Wynne’s epic fantasy saga, The Price of Magic.

SKU: TSBTS-B Categories: Books, Digital Books, The Price Of Magic, The Stars Beyond The Stone 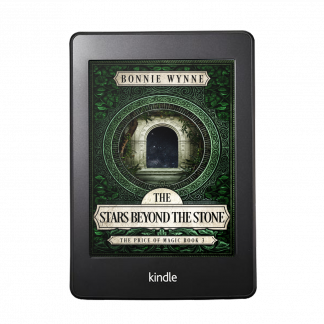 You're viewing: The Stars Beyond The Stone
The Price Of Magic Book III
Digital
BUY NOW ON AMAZON