Australia only. Click here to order international paperbacks from Amazon.

Kaylan’s life as she knew it is over. Again.

Hunted by the guards of Edriast and their ruthless captain, Kaylan is forced to flee into a world she’s never seen, armed with a power she never wanted. With her brother Elias by her side, she escapes to the distant city of Stynos, where rumour has it a possible ally is waiting… An ally who might help Kaylan control the violent magic that’s become her burden to bear.

But Kaylan can’t hide forever – not from the forces that surround her, or from the darkness inside herself. Rebel leader Bellamy seeks her help to destroy a regime; Captain Thorn pursues her with a vengeance; and as her power grows, her inner demons begin to seep through the cracks…

Kaylan may be strong, but is she strong enough to resist the Relic?

Riven is the engrossing second instalment in Bronwyn Eley’s dark YA fantasy series, The Relic Trilogy. 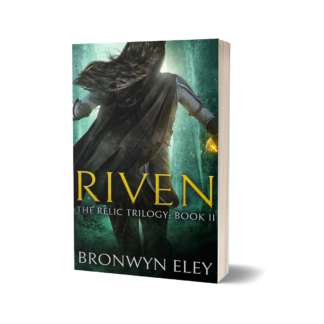