Time is running out.

With two Relics now in her possession, Kaylan must claim the final three before rebel leader Bellamy De Winter does. Then she must find a way to destroy the stones, once and for all.

But the magic is different now… and so is Kaylan.

After losing so much, she has forged a new bond with the Relic. It is more than mere magic, more than just a stone. Kaylan sees the dead Lord of Edriast, the man she killed to save herself, standing by her side.

The Relic is the only one who understands her now. But every word it whispers in her ear could be a lie. Every chance she gives it could be her final error.

As Kaylan pits her power against the men who seek to take it from her, she finds herself – and those she cares for – in more danger than ever before. And through it all, the Relic claims to be her ally… But as the perils of magic become clearer, Kaylan begins to wonder: will trusting the Relic lead to victory – or to death?

Rising is the gripping final volume in Bronwyn Eley’s dark YA fantasy series, The Relic Trilogy. 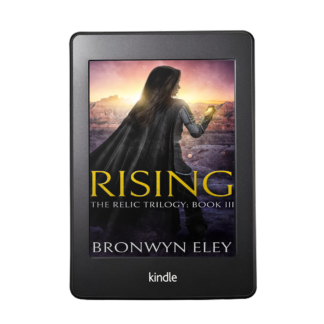